Dale Neuman was born and raised in Elyria, Ohio. He earned degrees in political science from Kenyon College and Northwestern University. Dale taught at Northwestern and the University of Rochester before moving to the University of Missouri-Kansas City in 1966. He began to write his poetry after retiring in 2000. Returning to UMKC part-time in 2005, he now heads its Harry S Truman Center for Governmental Affairs and edits a newsletter. Poetry, his most recent endeavor, fits nicely with his interest in photography as Reflections and Observations combine both interests.

Precisely as the title implies, Observations is a poetic record of Dale Neuman’s perceptions as he observes and absorbs through the senses settings ranging from autumn leaves to ladies lunching in town. Undertones are benign, punctuated with peace and acceptance, and strengthened with an occasional complimentary photo. 45 pages; a gem to read on a quiet morning or as the sun sets.

The ladies of Monday morning
Were there again today
Their quiet but animated conversation
Seemed almost a form of play.

They smiled and gently gestured
Speaking softly as if to avoid
Adding to the ambient cacophony
Of fast-food service noise.

With super-sized drinks
This morning’s choice of fare
They spoke of their kids and friends so fondly
You almost felt them there.

These ladies appear so special to me
I wish I knew the reasons why
They always seem to look, act and speak
Without some agenda to ply.

So I’ll go back next Monday morning
To sit in my usual place
And enjoy my senior-priced coffee
Refreshed by their oasis of grace.

Sounds and sights from a moving train
Take one back to those times when
A penny flattened on a shiny rail
Was to bring you luck instead of jail.

Sooty smoke and the hiss of steam
Made this young man often dream
To be the engineer leaning to see the track
Always moving on, never looking back.

Steam and soot lost to diesel whine
With engineers behind glass no longer friends of mine
Moving their engines coupled front to back
Creating awkward images sliding along the track.

Trains now longer and more quickly there
From and to places almost anywhere
Even these proved to be too slow
Moving us where we wanted to go.

First planes, then jets came to carry the load
With no one shouting or hearing “all aboard”
And no coins to be flattened and then to be saved
Or engineers to be seen as they smiled and waved. 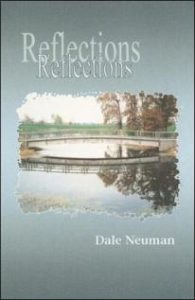 Brought to a contemplative state through the rays of sun, the sea, the vast reflections of the vertical sky across the horizontal plane of water: these are the subjects that inspire Dale Neuman to take his pen and camera all over the country, and to transform natural beauty through his mind and deliver it to the page in poem and picture. Reflections is a 45-page gem of sagacious serenity.

The quiet rays of sunset
Scatter atop a rippling sea
Tawny golden mirrors parting
As we slide through them silently.

Such times of brief duration
Are almost addictive to me
Moments of tranquil fascination
Both soothing and energizing to see.

The shadows of clouds now have covered
This melding of water and sun
Another day’s night is welcomed
With the work of that day now done.

(Please consider sharing a book review at Amazon or elsewhere.)