Robert Smith is a writer, poet, community organizer, ordained interfaith minister and sacred activist, and a founding member of a Catholic Worker-inspired intentional community in 1982
and “Dorothy’s Place Hospitality Center” in Salinas, California – and for thirty years friend to the homeless, as well as occasional cook, dishwasher, spiritual guide, street-sweeper, and director.

His writings have appeared in various publications including the Catholic Worker Journal and the Occupy Wall Street Poetry Anthology. With his wife Michelle, they are now living in the Midwest exploring a Universal Mysticism, the Divine Feminine, and the Possibilities of another intentional community. 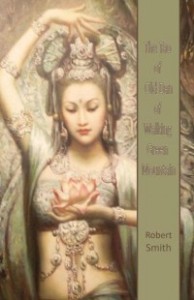 This, the second collection of Smith’s Walking Green Mountain series, is a harmonious fusion of the ancient (“Divine Mother”) aspects of new-age spirituality combined with Taoist philosophy. It is lucid, warm and welcoming, and pure joy to read! It begins with a wonderful twelve-page prologue and then flowers into 46 benign “free verses” followed by the epilogue which wraps up the story of Old Dan, bringing it full-circle, in essence, to begin anew.

The Problem: We have forgotten our origins in Love Consciousness and have let the representatives of Power manipulate and control our lives to their own advantage.

The Solution: We must enter upon the Path of Remembrance and recreate our lives and institutions according to the requirements of Compassion.

The Way: We were never abandoned by the Divine Mother – She has given us the way of remembrance: The Way of a Simpleton.

What purpose do you ascribe to your life?
What meaning do you seek in the ruin of your flesh and bones?
Why do you seek “forever,” when this moment
and this breath, is worthy of perfect love?
The simpleton can rest in the shade of desire
and not be tempted to power — not attached
to “purpose,” “meaning,” and “forever,”
the simpleton loves, laughs, and serves:
and is thereby opened by the pomegranate
of “purpose,” “meaning,” and “forever.” 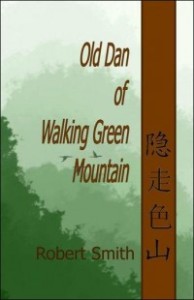 Inspired by Lao Tzu, Chuang Tzu, Basho and a list of many others as credited in Smith’s introduction, his words flow like a pristine spring mid-way down the highest mountain. He proffers the following: “So, here is ‘Old Dan of Walking Green Mountain’: he’s as real as both the sunrise and the river that flows through your heart and he’s right there, walking with you, too… and willing to share his walking stick when you need something to lean on…” Enjoy these 37 pages of pure joy, love and inspiration spilling over from the East like morning sunlight.

The old hermit lost his tongue
After building his cabin in the woods of
“Walking Green Mountain”… He used to smile,
Though, as he swept the porch and steps
And then continued on down the trail…
I followed him for a while
Until he stopped and stood before his sign:
“Reality One Mile Ahead”
While leaning on his tired broom…
He looked up at me as if expecting
A question or even a comment,
But receiving neither, he handed me
His broom and walked away… This is now
My second winter on “Walking Green Mountain”:
I’ve learned to pause most of my thinking
And my ink is finally running low:
So mostly I just listen now and wait
For the certain and steady approach of Reality…

The wild rose grows in the shadows
Near the banks of the “subtle creek of doubt”,
Often I have collected the fallen red petals
To place them upon my shy wooden altar:
It would never think to seek anything in shadows –
It seems to think only of the Light
It seems to only need my knees on the floor
It seems to only want my steady surrender…