Mohineet Kaur Boparai is a research scholar at the Department of English, Punjabi University, Patiala in India. Her research is concerned with subalternity, agency and subjectivity in the selected novels of Toni Morrison, Amy Tan and Abdulrazak Gurnah. Her book of poems, Poems That Never Were was published in 2007 by Writers Workshop, Kolkata. She is 26 and lives at Moga. She is teaching English at the Panjab University Constituent College, Nihalsinghwala.


Literary Activities:
— Published a book of poems, Poems That Never Were with Writers Workshop, Kolkata in 2007.
— Three of her poems ‘The Night of the Heroes’, ‘The Perfume Box’ and ‘Sighting Summers’ were published in the journal South Asian Ensemble, a Canadian quarterly.
— Two of her poems ‘A Journal Entry on the Sky’ and ‘The Call’ were published in Poetry World.
— Literary essay ‘Arousing Negritude: The Primitive and some other poems by Don L. Lee’ was published in a literary journal- The Atlantic Critical Review.
— Literary essay, “Black is Valid” appeared as a chapter in the book Studies in Literature, Volume XVII published by Atlantic Publishers.
— Presented the paper ‘Literary Perspectives on the Domination of Nature: Exploring the Hidden Causes of Climate Change at the Second international conference on climate change: impact and responses held at University of Queensland, Brisbane, Australia (8 to 10 July 2010).
— Paper, ‘Like a Phoenix: The Emergence and Deformation of Solidarity’ has been selected for the Solidarity, Memory and Identity Conference to be held in Gdansk, Poland in September, 2012.
— Paper, “Floating in Space in a Spaceship: Wislawa Szymborska as a Prophet in The End and the Beginning” was presented at the national Conference, “Prophetic Voices in Poetry” held at Punjabi University, Patiala on 29 and 30 March, 2012.
— Essay “Marubhumi- Living without Forests” was published in the N.C.C. directorate annual magazine, The Cadet.
— Essay “Humour in Uniform” was also published in The Cadet.

Awards
— Represented India as a delegate in South Korea in the Inter Governmental Youth Exchange Programme in 2008.
— Was chosen to represent India in a youth delegation to China in 2007.
— Was awarded the state level Role Model Award by Swami Vivekananda Study Circle for the year 2005-06.
— Obtained the silver standard of Duke of Edinburgh Award for young people in 2004.
— Obtained the All Round Best Role of Honour and College Colour in 2007. 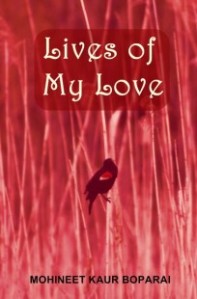 This book is a casing of love and its histories with verse and philosophy. A play of wild blooms amidst the organization of life, poetry in this book takes a break from the historical events of life and focuses on the anecdotal. It is sharp, impulsive and reflexive. The poet enters the world, walks to its other end and records what she sees journeying from an abyss to an Eden.

Slow as sunspots
Or weeds that grow in them
I rolled out of the morning
On the tips of the horizon
It had stages, as everything else
First the quilt was torn from my skin
Then something that had formed under it,
Like sweat, evaporated
Molecule by molecule.
I opened my eyes and
Saw a thorny hand in the window
Growing hard as an order
Unmoved by the wind that was
Everywhere, tearing at our cheeks
Like clothes drying on the line
Quickly the birds fled and became spots
Where last night the stars had been
I yawned, a carryover from last night
And remembered the balloon
Of expectation punctured just before
I put my feet in the quilt
The bed began singing an
Anorexic’s song of the hollow in my body
Of setting suns swallowed in
Whirlpools of fire
The morning took my hand and walked me
On a thinning tightrope of dreams
It was a story with a
Beginning, middle, and no end

Windows to the Ocean (from the back cover): “is a prolific exhibition of elemental truths through the minuscule – the last sip left in a cup, a moth at the botanist’s, a window that is actually a painting. The recording of these is urgent, compelling and vibrant. Her understanding of herself as a human is foremost in this collection, and the womanliness peeps in through the sensibility in her poetry. The poet speaks to our inward prophetic voice.” This collection is truly remarkable and unique. Cover art by Mohineet Kaur Boparai.

“Life from a Rainbow Cup”

Something will twitch in the yellow sun
And pink will flow out from its veins
A bride will pluck its maroon
A flag will soak down its blue
And marry red for white
In French, ‘white’ translates into ‘blanc’
-A curtain hiding contorted screams
Greenland is not green but white
And I can see purple in a silver birch
Bodies have colours, but don’t name them
They respond to brutality with bruises
And to love with blushes
Some brown will sleep in the corner
Of Mona Lisa’s lips. Someone will
Pick it on his brush and twist it into
A golden tree. In someone’s dream
The ‘Starry Night’ becomes a mermaid
Some colours are like a scratching neurotic but
All frames are not black. Grey is always
Stumbling into the picture from somewhere
It is a yellow room with shadows
The colour of the curtains drips green
Already the trees are falling in this wind
A cave opens from them and takes us to black
How fittingly it all stops
In the flame of an earthen lamp
The magic vanishes in its light

They all walked the staircase to the hall
But who was the first one that evening
To step into its peace and see its golden columns
Standing still and waiting,
For the last time for people?
He does not know it
What followed it has swallowed it, hollowed it
He has a lot to tell. But he would not.
History does not happen, it only comes to consciousness
A stray thought passes a woman with feathers on her head-
“The sea is also a forest. It might engulf me in its foliage.”
Long after the sinking ship surges into water, the thought
Lingers, is bolted to memory.
One passenger always keeps a pocket watch
He does not know they will recognize his body with it
A day after it stops ticking
Someone has put on purple nail polish
No one will notice it in the blind night over the ocean
She won’t remember it either, her head so full of life
Someone has just locked her personal drawers
And lies crouched in her bed, weeping into the pillow
She thinks she weighs as much as the ship
She will never open her drawers again
A photo of a lady and a gentleman in them
Is still alive under the sea, smiling, mystifying
Waiting for discovery